Many pro-”life” proponents have attempted to use the Kermit Gosnell case as a platform for their anti-abortion stance. Here Representative Tim Murphy goes into detail about the gruesome goings-on in the clinic Gosnell called Women's Medical Society at the H.R.358 markup on February 11, 2011.

But let's look a the facts:

Important fact #1 - The clinic had not been thoroughly inspected in 17 years. The grand jury report stated that,

“The Pennsylvania Department of Health abruptly decided, for political reasons, to stop inspecting abortion clinics at all. The politics in question were not anti-abortion, but pro. With the change of administration from Governor Casey to Governor Ridge, officials concluded that inspections would be 'putting a barrier up to women' seeking abortions.”

It also stated that nail salons are more thoroughly inspected. See, now this is what happens when we let political motivations be what drives this issue. The decision to stop inspecting abortion clinics was so foolish I can't even tell you. I don't care if the person making it claims to be on “my side” of this issue what is important is making it SAFE! That's what the reason for making it legal was/is in the first place.

Important fact 2 - Late term abortions are ILLEGAL in Philadelphia which is what Mr. Gosnell was preforming. So when anti-choice politicians try to use this case to make a case against LEGAL abortion they are being deliberately dishonest or are to dumb to be representing anyone. The truth is clinics like the one Gosnell ran are what you get when abortion is illegal.


For a more detailed discription of what an “abortion clinic” is like when it is not regularly inspected and the procedures it provides are NOT legal see the video below.


In response to all this spin a group of Philadelphia abortion providers have spoken out and the message sounds not-so-shockingly familiar to what sex workers rights advocates have been saying about sex work for years, "Making it legal is not enough. We must destigmatize it." I couldn't have said it better myself.

Finally, I want to address a statistic I see thrown around by anti-abortioners often as of late ant that is that 51% of Americans are “Pro-Life.” Is the video below conveys the “pro-life” vs. “pro-choice” dichotomy is actually false. What we should be asking is, “Do you think the woman and her doctor should have jurisdiction over a pregnancy or are you for the illusion that the state can ever really have control over a woman's pregnancy?”


We must remember. Even when we think we have taken all abortion options away a woman can and will resort to a coat hanger and I hope I am right when I say no one wants that.
Posted by Medusa's Arrow at 10:11 PM No comments: Links to this post

I've Made the Call to Support Planned Parenthood~Have YOU?

Planned Parenthood needs your help. They are asking that you call to express your support for them and ask your Representative to vote NO on H.R.217 a.k.a. "The Pence Amendment. This amendment's ONLY aim is to defund Planned Parenthood. I know...some of you are shy...some of you don't think you'll know what to say. IT'S EASY!

It's that simple. Now if you're deal is that you don't really know why you should here is a helpful PDF for you that should give you a great idea of why Planned Parenthood is so helpful. Below is a video recording my call to Planned Parenthood. Please do the same. Just call

You will be given helpful instructions and automaticlly redirected to the office of your representative. Planned Parenthood has been there for millions. Will you be there for it?

Posted by Medusa's Arrow at 6:26 AM No comments: Links to this post

Abortion Rights Under Attack-Know Your Enemy!

Well the 112th congress is now in session and as promised everyone in America now has a job. Right? LMAO! No. As expected the right made every promise in the book concerning jobs, the economy and everything they knew we wanted to hear & now they are hard at work attacking the rights of women once again. So far there are already four bills being discussed whose only purpose is to limit women's access to safe medical abortions. There are:

H.R.3~If you would like to do your part to help stop this bill please sign the petition.


This bill called the “No Tax Payer Funding for Abortions Act” should have been named “Rep. Chris Smith is so concerned about what you do with your vagina he doesn't even want you spending your OWN money on it.” That's right.

Even those of us who get tax credits for investing in our own health care savings accounts won't be able to use that money on an abortion if this one passes. Odd really because as Congressman Nadler points out here these religious righties don't consider it public funding when people spend their OWN money on a CHURCH & get a tax credit. Ah wait...most churches are run by men. Of course the religious right doesn't care how they spend their money. If there is a “patriarchy” in America today the religious right is the longest and strongest arm of it after all.

Yes, there is the inflammatory language about “forcible rape” that everyone is outraged about but I think people should be just as outraged by the so-called “Small government” strokers trying to tell women what they can do with their own money. Do we not WORK FOR our own money? Do we not EARN our own money? Or when they say “small government” do they really mean “small government for MEN?" I guess they believe that only men can be trusted to make their own decisions. This really doesn't surprise this sex workers rights advocate. After all, many of the feminists that have been in bed with the religious right for over ten years have been telling them that women can't be trusted to make their own choices as the video below will illustrate.


H.R.358~If you would like to do your part to help stop this bill please sign the petition.


If ever there was hard proof written ON PAPER that the religious right values a woman ONLY for her birthing value it is H.R.358. This lovely little misogynistic piece of legislation states that if it goes against a doctors conscience to give a woman an abortion EVEN IF SHE WILL DIE WITHOUT ONE that they don't have to do it making the title "Protect Life Act" the misnomer of the fucking century! Do we need any more proof that the religious right sees women as nothing more then brood mares people? Do we really?


Aside from that Joseph Pitts; the Representative that introduce the bill also happened to Chair the Markup hearing on it and it was a fiasco. The Democrats have sent a formal request for the bill to be withdrawn until constitutional authority is added to the bill. Here it is in it's three hour long entirety. If you've got the time you may find it interesting.

The little bill that could. I say little because NO ONE but my friend FeministWhore is talking about or has even noticed it. There's not even any money invested in fighting it. This bill would solidify this "conscience clause" stuff. Aren't doctors SUPPOSED to save the lives of their patience? Last I checked that's what being a doctor was all about. It's their JOB to make the tough decisions. Ever hear of a triage nurse?

Introduced by Rep. Mike Pence of Indiana. This guy has become my new best friend. There is nothing I love more then a rich, bible thumping MAN attacking what little access to affordable health care women in America have today. This bill is nothing less then a push to defund Planned Parenthood entirely. On what grounds could anyone do such a thing, you might ask. Well, based on videos from LIVE ACTION. Sound familiar? Well that wouldn't surprise me because this is the organization affiliated with James O'Keefe the snot nosed, little misogynistic shit himself. Pretty strong words huh? Well let's look at this kids list of accomplishments

-Dressed as a pimp to attack ACORN

-Quote mined Sheirly Sherrod in order to make her look like a bigot for which she is seeking justice now.

-Sneaking into Senator Mary Landrieu's office to BUG it for which he was arrested.

Is it just me or is EVERYTHING this guy and his organization does misogynistic? Now, I urge you to look at the rest of my posts and see for yourself if I am the type of feminist that throws around the term misogynist freely. You will notice I hardly use that word at all because I want it to MEAN something when I do. It seems like the only two reasons I ever use it are when an anti-porn feminist calls me a whore or when dealing with anything having to do with James O'Keefe. Is this really the sort of element Rep. Mike Pence wants to associate himself with? If so he's a fool. But don't just take my word for it. My latest video below should serve to convince you.


Well, if you've made it this far I commend you. Believe me, I wish there was less to write. It's pretty upsetting really which is why I am determined to do everything in my power to FIGHT FIGHT FIGHT! Will you do the same? I certinly hope so. The lives of millions of women around the world are depending on it. Planned parenthood alone helps roughly 11,000,000 women in a year. If that doesn't serve to convince you how about this? This is what happens to women with they don't have access to safe affordable abortions. You may not like abortions but many women will have one one way or another & if you don't want their blood on your hands you best not fight to take their abortion rights away. That is...if you really DO care about life. 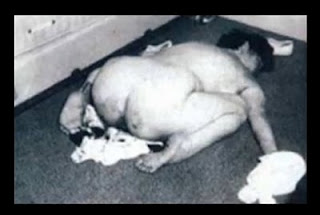 
I want to end this with a video Planned Parenthood themselves just came out with asking for our help. Please heed their call. If you don't who will?

Posted by Medusa's Arrow at 7:48 AM No comments: Links to this post