When I came to youtube I didn't know nearly as much about feminism as I thought I did and; of course, I had never heard of the men's rights movement. I knew that men faced injustice of their own and made a video giving my thoughts on it early on called, "How does the patriarchy oppress men?"

It was around this time that I met an anti-porn feminist who turned out to be EXTREMELY racist that went by the screen name DianaBoston. She went on and on about how horrible the MRAs where but honestly she went on and on about a lot. Well, I am a Humanist first and a feminist second so I figured if there were men who were being oppressed I wanted to know about it. We as women share this world with them. They are our brothers, fathers, lovers and friends. It is in this spirit that I set out to find out what it was all about.

I befriended a couple and speak about that in great detail in the video just below. Basically, I gave them a chance and they didn't give me a chance. I went into those friendships with them as MRAs only to find that when I did not meet their bigoted view of what a feminist was they would just deny that I was one. I found this extremely insulting and broke off those friendships. One of these people was JohntheOther

Johntheother is the last MRA I speak of in the video. I finally came to a point where I realized that he would never be able to accept me as a feminist because I didn't meet his bigoted view of what a feminist was. In fact, he insulted me greatly by saying that people like DianaBoston were real feminists and I was not. I broke off the friendship.

Well, now someone (I don't know who but I have a few guesses) is trying to smear me in the comment section of a PZ Myers blog post entitled 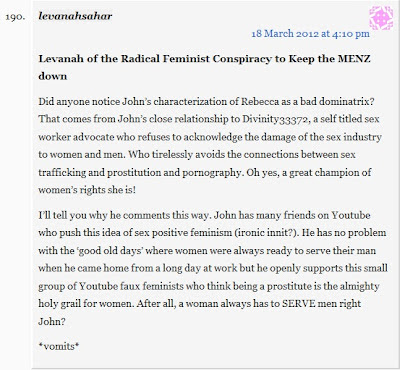 Well levanahsahar, I don't know who you are but here is what I have to say to you in response to your attempt to poison wells against me and sex worker's rights advocates in general.

I am not ashamed of caring about men.

I am not ashamed of giving someone others tried to turn me against before I even knew him a chance.

I am not ashamed of my insistence on thinking for myself and forming my own opinions about individuals or groups of people.

I; a feminist, am not ashamed to say that YES I see that men are oppressed to in their own ways and that I care about that.

I am not ashamed of being a former sex worker.

I am not ashamed of being a sex-positive feminist.

I am not ashamed to know and care about prostitutes or that I respect them and their decisions.

I am not ashamed that my best friend is a prostitute. (Something I wrote a little song about here:

Finally, I am not ashamed that I am NOT a bitter, sanctimonious, anti-porn, bigoted, control freak who will take any opportunity to smear someone I have a personal vendetta against. So flip on the oven and grab yourself some ketchup because you'll be eating these alone. 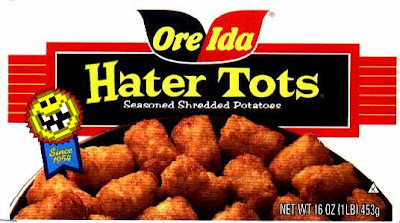